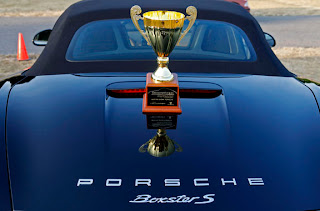 The Delta Porsche Cup sat waiting, glowing golden in the early morning sun. The DeutscheMarques show field at the Gilmore Car Museum was quiet as officials and participants had not yet arrived. Gleaming examples of brand-new Porsche excellence sat in the dew.


Delta Porsche, the exclusive Porsche dealer sponsor of the DeutscheMarques gathering, had parked the cars the evening prior to the event, across from where local Porsche owners would display their cars. When the judges chose the Best Porsche in Show award winner, whose name would be the first engraved on The Delta Porsche Cup? 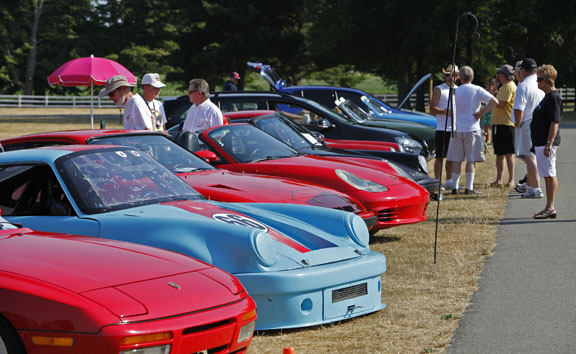 Soon an official count of 88 cars filled the DeutscheMarques area, many of them were Porsches, and the vast majority of those were driven by West Michigan Region of the Porsche Club of America owners. Stuttgart-made sports cars, from classic air-cooled 911s to front-engined water-cooled models to the latest mid-engined roadsters, Porsches were on display and eligible for a variety of prizes.

Michael Betz, the WMR webmeister, arrived early in the 1986 Guards Red 944 he’s got for sale, and volunteered to help finish registration packages before the DeutscheMarques participants arrived. Delta Porsche's Charles VanWyk cleaned the new Porsche sports cars and prepared his dealership’s pavilion for the coming guests. Claudio Kaempf, a longtime PCA racer and owner of Foreign Car Services in Kalamazoo, an event supporting vendor, brought his 1970 911 GT4S class racer and soon the Porsches began pouring in.
Late in the morning, the six-member judging panel began to inspect the field. The Delta Porsche Cup was waiting. Split into two teams, the Porsches were seen by Harvey Nuttal, the BMW CCA Michiana Chapter president, Lindsay Draime, past president and board member, and Gary Apps, one of the chapter’s founding members. Michael Betz served on the other team, along with Marv Berkowitz, president of the Mercedes-Benz Club of America’s Michigan Section and John A. Lacko, former WMR and KAZOOM officer.
Terry Schieble’s 1967 911S was named Best in Show Porsche. The red classic has travelled 150,000 miles including many hot laps at race tracks like Road America and Blackhawk. Schieble is the veteran WMR PCA Chief Driving Instructor. He’ll take home a beautiful crystal trophy and the Best Classic Porsche award. His name is now engraved on
The Delta Porsche Cup, which will be on display in the Grand Rapids dealer’s showroom.
Jerry Broersma, another WMR member, won Best Daily Driver Porsche with his burgundy 944, Paul and Diana Swope, members both of the WMR and the MBCA, had their 1981 all-original 924 Turbo judged Cleanest Concours Porsche and Best 1980s Porsche.
Mark and Kathy Bonnema’s 2008 Boxter S was named Best 21st Century Porsche and David Solleveld’s 1987 944 was given a Judges’ Special Award for its custom 924 GT look. Kaempf’s Foreign Car Services 911 racer won the Best Special Feature Porsche award and Jeff Krisel’s 1998 911 was named Best 1990s Porsche. Rick Riley’s beautiful Gulf Blue 1975 Carrera was named Best 1970s Porsche, continuing a sweep for WMR members.
Charles VanWyk of Delta Porsche ended the awards by holding a drawing and giving away free use of a Porsche Panamera four-door for a getaway weekend.
While the inaugural DeutscheMarques German car event at the Gilmore Car Museum is now history, plans for next year are already underway.

Please send us feedback via email at DeutscheMarquesAG@gmail.com that we may forward to the sponsors that made this event possible, Delta Porsche in Grand Rapids, Harold Zeigler BMW in Kalamazoo and Orrin B. Hayes Mercedes-Benz in Kalamazoo.
Please click on their names, above, to visit their websites and view inventory online.
When shopping for your next new or preowned German car, please support these local dealers who support local auto enthusiasts.


This website, www.DeutscheMarquesAG.com will continue to be a vital information source for all German car fans, creating an online community for you to join.
Please bookmark the site or hit the “Join by email” button to be alerted to frequent updates.