As usual, there were a lot of interesting developments at DeutscheMarques 8 held at the Gilmore Car Museum on July 6, 2019. 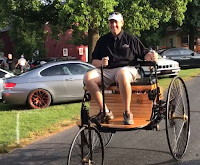 The Gilmore Car Museum didn't just feature their 1886 Benz Patent Motorwagen, they got it running and Executive Director Chris Shires was all smiles as he tooled it around the show grounds.

Not only does the show continue to grow - 380 cars this year, even as weather threatened - but more visitors came from further away this year, including Ohio, Florida, Indiana, Ontario, Canada, Wisconsin and Wisconsin.

And most of us saw a Goggomobil for the first time ever.

We like to say "Every German car is a show car at DeutscheMarques," and we had a LOT of unique vehicles to enjoy. Our esteemed panel of judges had a difficult time choosing 55 vehicles to receive special recognition. But choose, they did. 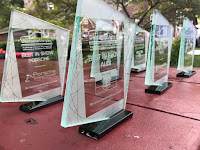 Here are the owners and their vehicles who took home certificates and - in the case of "Best in Show" for each marque, a beautiful crystal trophy.